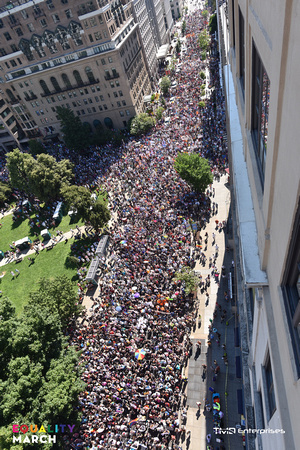 Unity March 2017 I Street NW Washington DCThis photo taken by Tom Donohue down I street from atop of the Club Quarters Hotel on the corner of 17th and I.

Oh, why not throw another picture into the mix of whether this crowd was larger than Trumps Inauguration?  The debate has already begun however all I have to say as the photographer is that crowd was pretty big from atop of the Club Quarters Hotel. Speaking of that - I should share the story of how I got these shots.

About a week - week and a half prior to the March I had started to call property management companies like Kushman and Wakefield inquiring about a stakeout for the march.  I kept getting told that they didn't have staff on hand over the weekend.  I was starting to feel a bit bummed as it was looking like I wasn't going to get this shot.

Sunday morning after a very long day Saturday attending an early Volunteer training and drag brunch for Capital Pride (I'm also the official photographer for Capital Pride) and then the Pride Parade (which ran way long) I started on my Segway mini (thank GOD for that thing) and stopping in buildings along the route again I kept striking out.  It was funny at one point I zoomed past a secret service agent who was watching me.  So, I stopped and explained that I was looking for a place up high to take some photos and he joked (or not) saying that would get me much attention and a lot of eyes on me (the start of the march was really only a block or two away from the White House) I explained that’s why I stopped to let him know and frankly that isn't a crime so feel free to watch all you want.  He took a picture of my TMD Press Credentials and wished me luck.

I'm pretty much giving up at this point.  I noticed we were trying to get folks to line up down I street to begin the march so on my way i went zipping around blowing my whistle (sorry to those who had to hear it!) but while wrangling everyone into the street I noticed ropes dangling from the room of the Club Quarters Hotel, most probably didn't even notice or thought nothing about it.  For me this was opportunity the window washing guys were only like 1/3 down from the top, however I didn't go anywhere I waited until the first person got to the ground and I asked him to take me to his supervisor.  Once I got through to him (darn I should have paid attention during Spanish) he took me over to the Chief Engineer and I began to tell him how much he could make my day.  He needed very little convincing I told him I wanted to capture the image for historical purposes and within like a minute he said yes and took me right up to the 11th floor then up onto the roof.  Can I tell you the window washer guys they have some view but more importantly I can't fathom having to do that job.  Woah.

I started to shoot up and down the street even with my wider lens I couldn't get everyone in the shot plus there were a lot of people filling up Connecticut Ave and not going to fill in I had they this picture frame would have been so much bigger.  I snapped away as the march started off -for some reason I was nervous I couldn't really see well as I was leaning over the building extending my arm trying to clear as much of the building as possible It was a really cool experience and a story I probably won't forget for a while.  Plus, these can go into the history books and be kept for historical purposes. 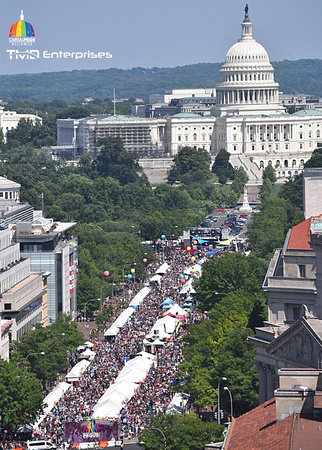 A look down Constitution Ave towatrds the Nations Capital over looking Capital PrideCapital Pride Festival and Pride Concert from atop of the highest spot in the district open to the public. The Historic Site: The Clock Towner of the former post office building

As I mentioned earlier for the third year now I have donated all of my time and resources to Capital Pride Alliance for about a week and a half capturing the pride events generally kicking off with the Heroes Gala.  Man its always so much work but its a lot of fun. I truly love doing it and invest a lot of time and energy.  It has brought a lot of awareness of my services and a little business.  This year I got a call just before leaving for an event from a firm on the west coast who represent AT&T they wanted someone to record their footprint/tent during Capital Pride. They did not realize that I was Prides photographer but I got in touch with a colleague of mine who has worked for me before and asked if he could do it as I didn't have any more bandwidth to give.  Thankfully he said yes and I was glad to help them out.  So upon leaving the Rally like a block away I went to the Newseum got some good shots from their sixth floor (thank you Newsuem this is the second year they've allowed me to do that) Then I went off to Trump Tower where the second highest place in the district allows for an awesome view.  The first is the Washington Monument and we all know that broken story.  From the Newseum I went over to see if I could get up there (its somewhat of a secret gem such a beautiful day and no one was in line. I got right up and was able to get some shots.  They have this wiring which makes it hard to get the shots but I was able to pull off this one.

Then I uploaded some of the crowd shots to twitter saying that I figured there were a few people waiting for Miley Cyrus and headed back to the main stage.  One bummer of the day is when I was up on the roof I left behind a small 2x2 high def camera clipped to the edge of the building thinking its easier to say I left something up there then to ask for permission to leave it there lol - I know bad me.  I had hoped it would have provided for a video of the entire route but after about a minute it shut off and I didn't capture a single person walking by lol.  Boo. The angle would have provided for a good video even time lapse had it worked.

Well those are the stories behind the shots this time.  For those interested I'll also post the galleries from the Advocate Magazine I shot and leave you with the url of all of my shots which are now posted on our website which include all the aerial shots from both events.  Feel free to leave some comments or share the story and remember you can follow us on Twitter and Facebook