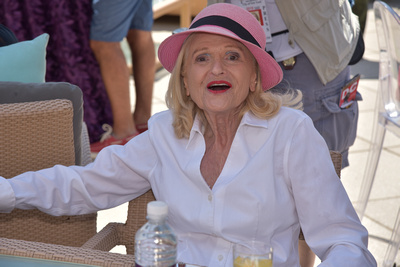 Washington (CNN)Edith Windsor, the plaintiff in the 2013 United States Supreme Court case that struck down a federal law defining marriage as between a man and a woman, has died at 88, according to her lawyer.

Windsor's death was first reported by The New York Times.

As the lead plaintiff in the legal challenge to the Defense of Marriage Act in 2013, Windsor was a hero to supporters of LGBT rights, who credited the SCOTUS ruling in her case as being the first step to an eventual ruling two years later that cleared the way for same-sex marriage nationwide.

Anthony Romero, executive director of the American Civil Liberties Union, said that with Windsor's death, "we lost one of this country's great civil rights pioneers."

"The wheels of progress turn forward because of people like Edie, who are willing to stand up in the face of injustice," Romero said in a statement. "One simply cannot write the history of the gay rights movement without reserving immense credit and gratitude for Edie Windsor."

"In standing up for herself, Edie also stood up for millions of Americans and their rights. May she rest in peace," Clinton tweeted.

Former President Barack Obama also offered his condolences, and said he had a conversation with her a few days ago, in which he told her "one more time what a difference she made to this country we love."

"Few were as small in stature as Edie Windsor -- and few made as big a difference to America," Obama said.

Same-sex marriage was legalized by the Supreme Court while Obama was in office.

Windsor, who was from New York, often said that she fought her battle in memory of her wife Thea Clara Spyer, who died in 2009. Windsor and Spyer married in 2007 after some 40 years together as a couple.

When Spyer died, she left her estate to Windsor, who then sought to claim federal estate tax exemptions that exist for surviving spouses. Windsor was barred from obtaining the exemption under DOMA, which defined "marriage" as excluding same-sex couples.

Windsor sought a refund of over $300,000 dollars but was denied by the IRS. Her lawyers argued that DOMA violated equal protection.

Justice Anthony Kennedy, joining the liberals, wrote the 5-4 opinion striking down the law that he said placed "same-sex couples in an unstable position of being in a second-tier marriage." Kennedy said that the law "demeans" same-sex couples "whose moral and sexual choices the Constitution protects."

"Under DOMA, same-sex married couples have their lives burdened, by reason of government decree, in visible and public ways," Kennedy wrote.

Windsor was survived by her wife, Judith Kasen-Windsor.

"I lost my beloved spouse Edie, and the world lost a tiny but tough as nails fighter for freedom, justice and equality. Edie was the light of my life. She will always be the light for the LGBTQ community which she loved so much and which loved her right back," Kasen-Windsor said in a statement.

In a statement from Windsor's attorney, Roberta Kaplan, Kaplan said representing Windsor "was and will always be the greatest honor of my life."

"She will go down in the history books as a true American hero. With Edie's passing, I lost not only a treasured client, but a member of my family. I know that Edie's memory will always be a blessing to Rachel, myself, and Jacob. I also know that her memory will be a blessing not only to every LGBT person on this planet, but to all who believe in the concept of b'tzelem elohim, or equal dignity for all," she said.

GLAAD, an LGBT media monitoring organization, also remembered Windsor on Twitter, saying: "Edie Windsor was a hero and her contributions to the fight for equality and acceptance will be remembered forever."