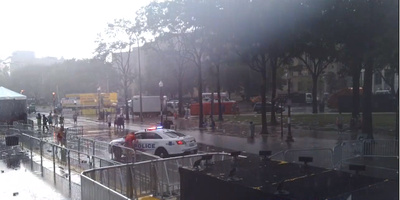 MUST WATCH: TMD Enterprises, an official photographer for 2015 - 2018 Capital Pride placed a time-lapse camera up on the main stage in hopes they'd capture a good summary of the day’s events what they captured was mother nature showing off her pride.  As the afternoon wore on, the skis kept getting darker and darker when a severe thunderstorm was announced, and staff asked everyone to seek shelter, after several prideful hardcore concert goers were evicted by the MPD for their safety the sky let a very prideful mother nature show everyone what she could do and let me tell you she was proud of the amount of rain she dumped on everyone.  There was a river running through the middle of the stage - things were literally floating away it was incredible.  Everyone evacuated and then, the most beautiful thing happened - as it did throughout the morning the crowd slowly began to return and return in HUGE numbers.  The concert filled up as though no one left.  It was amazing and TMD Enterprises captured it all - and without any water damage to its camera - a shocking surprise as it should have floated away with everything else.  So, it back and enjoy the 2015 Capital Pride feature weather and concert presentation hours of video all in just about a minute and a half brought to you by TMD Enterprises.  To check out all our photos from 2015, 2016, 2017 & where our 2018 photos will go visit - http://www.tmdenterprises.us/capitalpridealliance