Photo: 1 little Girl, Two Branches of Goverment, A Life Decision Decided For Her 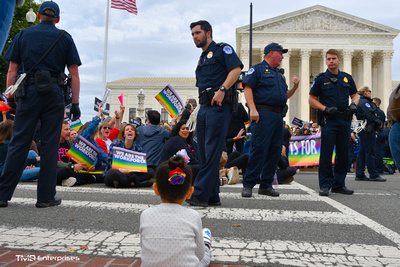 On Oct 8, 2019, I was photographing the happenings at the Supreme Court while oral arguments were made in two LGBT cases on LGBT Employment discrimination and Transgender Civil Rights. Those supporting LGBT and Transgender Civil Rights began a civil disobedience by obstructing traffic and causing traffic to be re-routed. Upon three verbal warnings by the Supreme Court of the United States Police they 'arrested' the protestors and they orderly removed themselves from the street for processing. While this was happening, I noticed the innocence of a young child. She was sitting quietly focused on what was happening before her. I was struck by her intrigue and attention to the situation. On this day while sitting on a public street of which I help pay to maintain as a District resident (and who has no representative who can vote in Congress in the building behind us) this precious innocence watches federal law enforcement officers corral these now law breaking advocates.  Those non-violent attention seeking protestors sitting in the street are fighting for the rights that are at that very moment being argued before nine US Supreme Court Justices in the building in front of her, The United States Supreme Court. She watches as warnings are given and the protestor's defiance causes them to be taken away. What little Naya doesn't realize is that those Justices are listening to arguments that will affect her life and those of her friends for years to come. She is watching people fight for her and others so that she years from today can reflect upon these photos and say, these are the people who stood up and fought for me. for themselves, for my rights, for their rights that day. What she doesn’t see is that just feet before her behind the thick walls of that historic building tucked away in a chamber are those Justices. They are listening and inquiring about the information that is presented by two different sides of the issue. 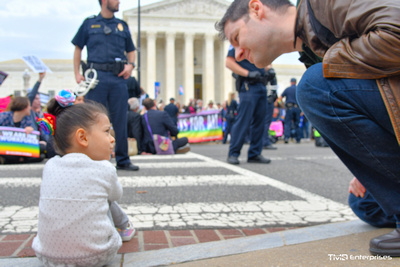 This is our political system working before her, while sitting on the ground, she literally sits between two branches of government  In that building in front of her those nine (many of likely will be replaced before she can even vote) will determine whether specific civil rights will dictate how lives will be lived for generations past her own. In the middle are those fighting for the rights they want her to have, they are fighting for her and her present and future friends.  I just can’t help to think that maybe, just maybe, one day she might reflect on this picture and see them as heroes.  Heroes just like the many that have come before them.  Heroes who have disrupted the streets, who have stood up and fought back, who have fight for, won and lost battles, some of which give her what rights we have today.

So, Naya Goodnight little one rest well knowing there are good people fighting for you, they'll fight as long as they can to make sure you live in a better country. May God Bless those nine Justices as they ponder what was presented before them and may God Bless the United States of America.