Pride Photographer: "Shots Fired", No Shots Fired Well What Was it?

As an official volunteer photographer for Capital Pride for the last five years, I have gotten to know how the Capital Pride Alliance Team mostly of all volunteers (except its few paid staff) work.  On Saturday, as usual this well-oiled machine with months and months of preparation and much love for our community brings thousands to DC to take the lead in what is a month full of Pride activities across the country.  At 4AM crowd control barricades begin to be placed in and around Dupont - this was new, generally a tractor trailer would pull up and these barriers would be placed down shortly before the start of the parade, however in past years this process would get clogged up sometimes jamming traffic up preventing the movement of the trailer from happening ultimately causing a traffic nightmare and preventing the parade from starting as the parade cannot begin until the parade route is completely secure.

Volunteers who have recently signed up attended trainings lead by Capital Pride Alliance happen in the days and weeks prior to the celebration.  Managing this amount of coordination takes an abundance of organization and planning.  While the parade is being set up across town another celebration is beginning to be set up.  Yes thats right this team of volunteers have not one but two, major events which require the assistance of many district wide agencies both local and federal law enforcement agencies to execute what for many is the safest place for them to be themselves.  While parade participants begin to arrive down one of many access points (I mean you know how big and long the parade is how, where and what does it take to coordinate where everyone goes and in what order is another amazing yearly process that Capital Pride and its volunteers have down) a stage is being constructed in front of the US Capitol.  It will be the home of a completely different team of volunteers who have spent the past year planning and tweaking actual plans - I mean drawings of where every single structure (oh lets not forget details like how much the structure weighs and such in order to be assured everyone will be safe should bad weather arrive) or tent, or generator will be arranged.  The stage, lights, speakers, tents, command center, EMS, I mean to watch both of these areas simultaneously be erected, secured, the meetings, trainings, man power to put Capital Pride together is simply a feat no one even thinks about until you see the behind the scenes.

The attention to detail and the coordination between Capital Pride, local and federal agencies helped prevent what could have been a major incident from happeinng.  As far as the incident that happened on Saturady here are the facts as reported by the MPD:

NBC4 does a real good job at describing the timeline:

So to summarize, No shots were fired.  A handgun turned out to be a BB Gun.  Two People arrested.  Parade cut short, all other events still on. Sadly, for the festival its raining.  However, its not expected to get like in 2015.... Remember this - our great time-lapse can remind you:

Look, I started off trying to educate about the process that most people don't see, it’s important to note the behind the scenes steps, the months of meetings and trainings, the coordination between agencies these all came together yesterday at a time when whatever energy or higher power wanted to test the plan. What comes of it could be some tweaks from lessons learned, there is always something to learn from these types of events whatever it is and whether or not it’s made public just assure that from this photographers point of view, Those attending should know the extraordinary efforts that take place to leverage a level of safety with the need for visible and plan clothed law enforcement.  Yesterday's test forced the emergency plans they train so hard to perfect to be implemented. 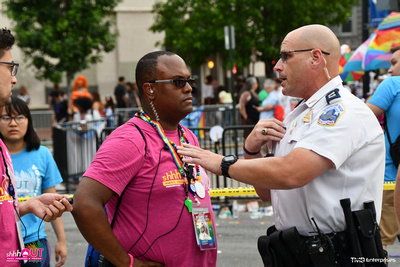 The Capital Pride team, its executive team lead by the Volunteer & President of the Board, Ashley Smith and its paid Executive Director, Ryan Bos were immediately dispatched, I witnessed Ashley working side by side law enforcement, radio broadcasts were restricted to the most important, cell phones were in hand and some of the best coordination I've seen in events took place. in the end an understandable yet in my opinion unpreventable instinct to flee (something that only instinct can control) took over and the fear resulted in a few minor injuries.  Lessons for the public - well its one we've heard over and over - "If you see something say something" as far as lessons learned by Capital Pride - I can only assume but can attest to is preparation and communication helped to prevent more panic and injury. 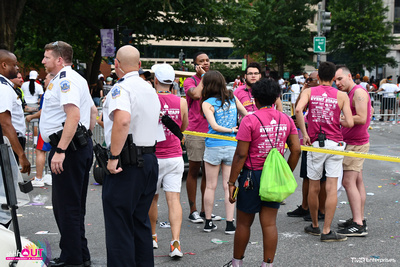 I applaud the entire Capital Pride family, from the top volunteer to the interns and volunteers who worked on its own wrapped

awesome looking float.  Your hard work, consideration for all, ability to stay calm and love for each other tested your family, however as the saying goes, the show must go on and that it did.  I urge the family to take a moment to reflect, to imagine what could have been, to never loose sight of the responsibility you had and continue to have to make sure everyone is safe and finally be proud of the beast you've perfected.  You'll learn something from this and for it next year will be better.

As far as those who sat back to enjoy the beast consider what occurred yesterday, what it could have been, and what it wasn't.  I'd encourage you if your able to reach into your pocket and consider making a tax free contribution to Capital Pride Alliance as a thank you.  You trust them by coming out now thank them for what they've done by investing in future pride events.

Now... who and what is this about a marshmellow head?  Huh?  Off to the intersection where branches of government sometimes collide Pennsylvania and Constitution Avenues for a festival. 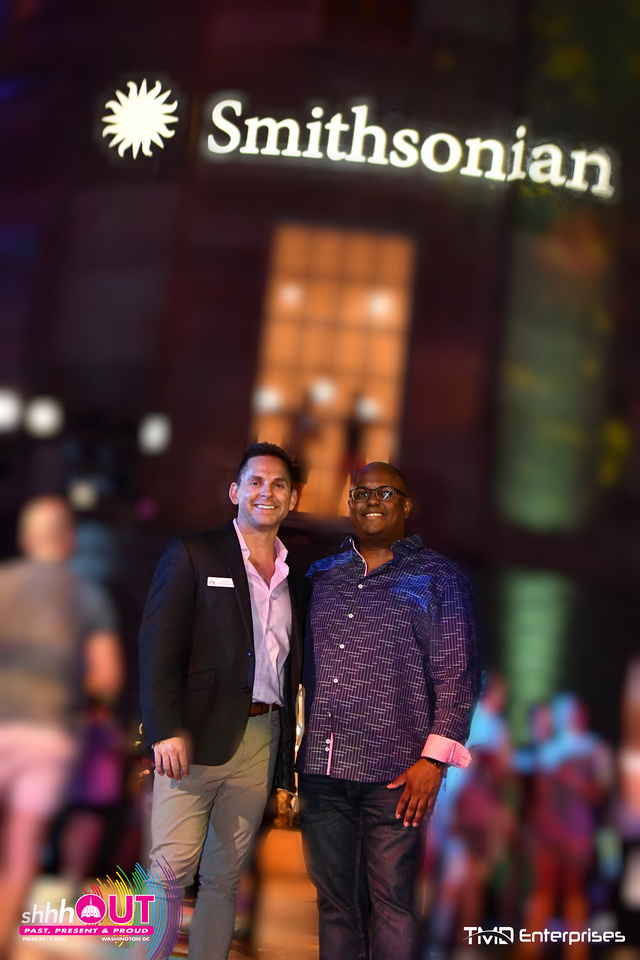 Capital Pride Alliance Executive Director, Ryan Bos and Board President Ashley SmithRyan & Ashley pose for a shot in front of a projected image of the Smithsonian logo during a 2019 Capital Pride event that took place at the Smithsonian American Art Museum and Renwick Gallery Photo: TMD Enterprises / Tom Donohue 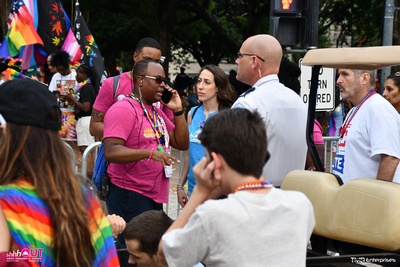 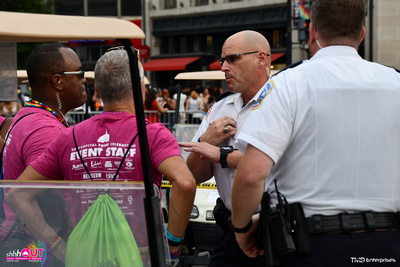