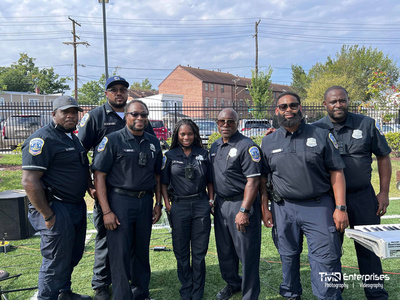 MPD Side by Side Band

Today members of the Metropolitan Police Department Side by Side Band set up on the schools new turff field and played for the students of Ward 8.  Students were having a blast!  As a community member and neighbor to Boone Elementary its so important to see this type of interaction with our youth.

The Side By Side Band was first formed 1972, right in the heart of Washington, DC and it was originally comprised of members from the Metropolitan Police Department, DC Fire and Emergency Medical Services, and the United States Park Police.

During the initial stages of the Officer Friendly Program, the primary focus of the Side By Side Band was to connect with the community, specifically with the youth, by performing at elementary and middle schools. Through the passion and power of music, the band built a rapport among students, their parents and other community members. Over the years, and inspired by their personal experiences with band members – as students from those schools or as fellow members of the Metropolitan Police Department -- numerous officers have performed in the Side By Side Band.

Under the guidance and vision of Chief of Police Peter Newsham, Patrol Chief Lamar Greene, Commander William Fitzgerald and Commander Michae
l Coligan, the Side By Side Band was revitalized in 2018 with a focus on building stronger community policing relationships and engaging with audiences of all ages. Because music is a universal language and a popular outlet among residents of the District, performances by the Side By Side Band create a natural way for the police department to connect with the community.

Since its revitalization, the Side By Side Band has performed at multiple Beat the Streets events, numerous community fairs, and a variety of DC events and pop-up shows. The band has made special appearances at landmarks like the Nationals Park Stadium and DC staple, Ben’s Chili Bowl. The band has also performed on the DJ Flexx GoGo Live 95 show on WPGC 95.5 for the local Washington community.

The School Safety Division regularly partners with the Side By Side Band to coordinate musical performances during Officer Friendly presentations at DCPS elementary schools. Through the Officer Friendly Program, officers visit schools throughout the District and present important age/grade-level appropriate safety lesson plans. The Officer Friendly Program, along with the Side by Side Band performances, provides an opportunity for young people to interact with law enforcement officers in a safe and positive environment.

For more information about the Side By Side Band, or to request a performance, email [email protected].