The case: USA vs Eric Beasley Case # 2020 CFl 6999
The emergency hearing which could release a murder suspect from jail 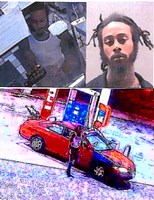 According to the affidavit in support of an arrest warrant. On Sept 4, 2020, Mr. David Farewell had been "struck by a vehicle while riding his bicycle in the 2100 block of Young Street, Southeast, Washington, D.C." it goes on to say, "at approximately 2358 hours, the footage depicts a red vehicle with gray front fenders and a bicycle rack, hereinafter the suspect vehicle, traveling south in the 2200 block of Prout Street, Southeast. The decedent, riding a black bicycle, is also traveling in this block on the sidewalk on the eastside of the street. The decedent and the operator of the suspect vehicle travel into the intersections of 22nd and Prout Streets, Southeast. The decedent, on the sidewalk, dismounts the bicycle, and approaches the suspect vehicle. The decedent then gets back onto the bicycle and rides east in the 1400 block of22nd Street until he crosses over near the intersections of22nd and Young Streets, Southeast. The vehicle also begins to travel eastbound into the block and appears to accelerate and swerve toward the decedent, striking and running over him"

A woman traveling with Mr. Farewell, said that Mr. Beasley followed them as they left the gas station at Prout and Pennsylvania Ave. The witness went on to say that Mr. Beasley was harassing and talking to her and creeping and following them.  She said he said, “Baby girl I want to talk to you. I want to get to know you," or words to that effect.  She said he was "disrespecting" Mr. Farewell (with whom it has children in common) who then stated to Mr. Farewell "This is my wife," and began to get aggressive and jealous however did nothing to the suspect. The witness said she was not arguing with the decedent and that she told Mr. Farewell she did not know the suspect and was trying to walk fast up the street. The witness then heard a car noise and thought suspect Beasley was going to leave.  Before she knew it,” the suspect had "rolled" over Mr. Farewell with the burgundy car and that she believed the suspect did this intentionally. She said she ran to get help and encountered uniformed MPD members who drove her back to the crime scene. The witness said she did not know what the suspect would do to her and feared he may try to shoot her.

The affidavit continued saying, "Sixth District officers observed scrape marks on the pavement on the scene of the offense. These scrape marks continued from the intersection of 22nd and Young Streets. into an alley in the 1900 block of Curtis Court, and north into the 2000 block of Fairlawn Avenue, Southeast. Officers located a parked, unoccupied red two-door Honda Accord with gray fenders and a bicycle rack (DC registration of GAXXXX), matching the description of the suspect vehicle observed on surveillance footage. Officers observed extensive damage to the exhaust system. While canvasing the area where the scrape marks were observed on the pavement, officers located bicycle parts. A black bicycle with extensive damage was also located in a fenced yard in the rear of 1911 Fairlawn Avenue, Southeast.

Detectives obtained surveillance footage from the Mobil gas station at 2305 Pennsylvania Avenue, Southeast. At approximately 2353 hours, the suspect vehicle enters the parking lot and parks at a pump. The driver, a black male with a light complexion, thin build, and dreadlocked style hair pinned back, wearing a white tank top, light colored pants, and black and white tennis shoes gets out of the car. Beasley leaves the driver's door open and walks inside the store to make a purchase. He exits the store within a minute and returns to the suspect vehicle and pumps gasoline. Meanwhile, Mr. Beasley and his companion (witness 1) are pumping air into the tires of a black bicycle. At approximately 2355 hours, they both walk across the parking lot to Nicholson Street, Southeast. The suspect drives out of the lot in the and onto the same street shortly thereafter. No interaction between Beasley, the Mr. Farewell, or the witness appears on the video.

I feel an obligation to the citizens of the district to inform them that there are suspects using the jails conditions as a way of requiesting they be released to home confinement.  I only know about this case because I help follow it for the victim’s family.  says Tom Donohue, Owner of TMD Enterprises. Donohue went on to say, "The video our cameras captured is disturbing to watch then and it still is today especially after getting to know Mr. Farewell's family.  The suspect accordingly to the affidait, Eric Beasley was the driver of the car which our cameras show intentionally swerve to hit Mr. Farewell and just leave him for dead.  This is not the type of Washingtonian I want on our already dangerous Southeast Streets." After being served a subpoena, Donohue turned over video from his cameras of 30 minutes before and after the incident occurred.  He went on to say, "I didn't know anyone involved in the incident however I was moved to hold a candle lit vigil shortly after Mr. Farewell's passing for the family.  I have and continue to remain close to the family by keeping them up to date on the hearings of which they have attended.  I just can't imagine how a murder suspect caught on video intentionally running over a complete stranger could possibly be released and put back into society via home confinement.  I call upon Judge Kravitz to find a humane place for Beasley to continue to be held until his trial next year.  Beasley has a history of violent crimes and although innocent until proven guilty his charge of first degree murder along with the video show Beasley to be a threat to the community and any witnesses.  No inmate should have to live in inhumane conditions however no citizen should be afraid that a murder suspect could be released because under the Mayors watch the jail wasted away to cause such deplorable conditions.  The Mayor has a lot of questions to answer and accountability to claim as she has been Mayor for nearly seven years.

*EMERGENCY MOTION FOR IMMEDIATE RELEASE FROM DETENTION DUE TO UNSANITARY, UNSAFE AND UNCONSTITUTIONAL CONDITIONS OF CONFINEMENT

* AFFIDAVIT IN SUPPORT OF AN ARREST WARRANT