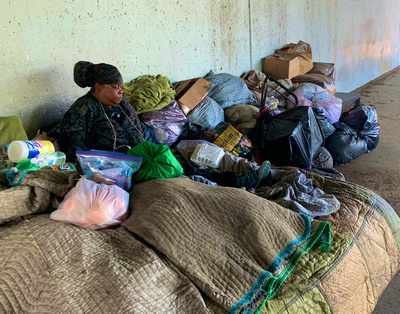 On February 20, 2021 Wards 7 and 8 along with Friends and family gathered at the home of Ms. Angela Belinda Hill who has lived under the 295 overpass for nearly 20 years.    Below find a Washington Post Article and video to Ms. Hill's vigil.

Angela Hill is shown in an undated photograph. (Courtesy of Jimmy Williams)

No one knows why Angela Belinda Hill lived for years under a bridge in Southeast Washington.

She told some people she was waiting for her husband, although she didn’t have one. Another false rumor was that her son had died on the bridge, and Hill slept beneath it to honor his memory.

Whatever the reason, she wouldn’t leave. Surrounded by blankets, hand wipes and carryout containers, Hill slept on a mattress and made the underpass her home. She would sometimes begrudgingly accept food or hygiene supplies. Other times, she would toss them into the street.

As the city changed around her, she became a fixture near the John Philip Sousa Bridge, routinely spotted by commuters near the Pennsylvania Avenue and D.C. Route 295 interchange. She refused to go to homeless shelters.

Hill is shown in an undated photograph.

Amid this week’s cold snap, Hill’s time at the underpass ended Wednesday, when she was found dead. She was 58.

Linda Miley, who found Hill, lives in the Hillcrest neighborhood east of the bridge. She estimated Hill lived at the underpass “for almost 20 years.”

Miley would drop by with “basic things” for Hill, she said — crackers, water or juice. She last saw her in August during a heat wave, when she brought Hill cool drinks packed in dry ice.

When temperatures plummeted Wednesday, Miley decided to check on Hill.

“I was going to see if she wanted something hot to drink,” she said. “She didn’t respond. I thought she was sleeping. I called her five times. . . . I decided to tap her, wake her up. When I touched her, I realized her body was still.”

Deaths among D.C.’s homeless jumped this year, including 23 who died of the coronavirus

A D.C. police report about Hill’s death noted only that she was found unconscious and not breathing. A cause of death was not released, and the D.C. medical examiner’s office didn’t provide additional details Friday.

At a Thursday news conference, Mayor Muriel E. Bowser (D) said at least one homeless person died in the cold this week. Hill was not identified.

“We will do everything possible to have someone come in from the cold,” Bowser said. “We do have safe shelter available for them.”

Wayne Turnage, deputy mayor for the city’s Health and Human Services agency, said in an email that Hill “was known by many of our District agencies, as they diligently worked to connect her to services and supports, including housing.”

Jesse Rabinowitz, spokesman for Miriam’s Kitchen, a D.C.-based nonprofit that helps the homeless and participates in an annual vigil for those who die on the streets, said Hill was one of five homeless people to die in the District in the past two weeks. He called on the city to spend $100 million on efforts that would seek to end chronic homelessness in D.C.

“Ending homelessness is a matter of life and death,” he said. “We see every day that housing saves life and ends homelessness.”

Last year, 180 “undomiciled” people died, according to city records, including 80 people of intoxication, 23 of the coronavirus, nine in homicides and four by suicide.

The Sousa Bridge is among the city’s 68 encampment “engagements” — cleanups of areas where homeless residents have set up tents. It’s not known when Hill last had contact with social workers.

Ashley Brown, Hill’s daughter, said she was not aware of her mother’s contacts with case workers. She said Hill suffered from schizophrenia and bipolar disorder for decades and had lived at the underpass “for well over 10 years.”

She would not take medicine, Brown said, and often didn’t recognize her family.

“It's just been a really tough, tough struggle trying to keep her alive out there,” Brown said. “We just tried to make sure she had the things she needed to survive. . . . At times, we tried to take her physically somewhere, and she would fight. My mom was most comfortable where she was.”

Brown also laid rumors about Hill to rest. She was never married. Her son — Brown’s brother — had not died at the bridge, but is alive and well. Hill has two grandchildren she never met.

Schizophrenia runs in Hill’s family, Brown said. Her grandmother, who lived near the bridge, struggled with the disease. And Hill battled it for as long as Brown can remember.

Before the city removed Brown and her brother from Hill’s care in the 1990s, there were some good times, Brown said. She remembered her mother watching “Star Trek,” completing puzzles and doing her hair.

There also were hard times, when Hill endured mental health crises. She wouldn’t feed her children for weeks. Brown said her brother once sneaked out of the house to steal food from a grocery store. Another time, he used an iron to make a grilled cheese sandwich.

After her children went into foster care, Hill would search for them — “determined to fight and find us during her sicknesses,” Brown said.

“I would never see my mom angry,” she said. “I know that she loved us even after finding out she was ill. I never, ever judged my mom. I had the utmost respect for my mom.”

Those who knew Hill organized an online fundraising drive and a vigil scheduled for 4:30 p.m. Saturday near the bridge.

“In this country we don’t see everybody as human,” Miley said. “There are a lot of people on the street who go to work every day and have no place to live. . . . When you’re on the street, it’ll change your mental state.”

Ayanna Smith, who connected with Hill’s family to organize the vigil, said she lives near the bridge and said she saw Hill frequently.

“She was a member of our community,” Smith said. “I wanted to honor her. . . . I wanted people to say her name, to know she was a person.”

For Brown, her mother’s death comes amid a season of sorrow. Her aunt, Hill’s sister, died two months ago, possibly of the coronavirus.

There is just one silver lining.

People with concerns about someone living outside can call the District’s shelter hotline at 202-399-7093.